Mysteries, legends, adventure and myths, the history of the Knights Templar has it all. It has one of the most recognisable symbols in the world today, the red cross. In 1128 Pope Honorius II assigned the Templar Knights the white mantle of the Cistercians, on which they wore the red cross with square ends. However, in 1147, Pope Eugenius III ordained the use of the 'Eight-Pointed Cross', which has been used by the Knights Templar ever since. But who are the Knights Templar? 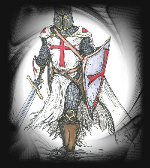 Few people really know, and on this site, we give a brief history of the order, the power they held, what they have become now, and details of how you, as a citizen, can, by becoming a member, help the United Kingdom, be more the place you want it to be. Compared to other Knights Templar organisations, it is likely you will find our organisation is more "forward thinking" to achieve our aims, with a few modern adaptations, are attempting to attempt what the original Knights Templar, were formed for.

Think about this: The original Knights Templar were formed as a Christian Military Order to protect pilgrims visiting the Holy Land. Because of little or no armies and lack of defence, many European countries then hired the Knights Templar to fight in the Holy Lands. All this was happening in the 11th, 12th, and 13th centuries.

Protecting one’s faith? Not wanting to be governed by others. Lack of proper defence? Ever growing march of immigrants? Ring any bells?

If you genuinely care about preserving the British way of life, do not just moan about the injustices being done and then do nothing, because doing nothing, allows them to happen! At least try to do something about it and maybe join our ever-growing membership.

Our increasing family of sisters and brothers who fiercely care about one another and our Nation.

With Area Commanderies throughout the UK. We regularly meet to help fundraise for good causes, help with care packages for the homeless, recruit, share petitions, socialise, and visit historical places of interest.

We like to get out and about in our communities and help as many people as possible. Whether it is giving our time, any act of kindness, no matter how big or small, touches someone.

On a regular basis, we give money for good causes and various charities.

We find it incredibly sad that people confuse patriotism with racism, and we want to clarify the difference. We are NOT right wing and hate speech is not tolerated in any shape or form within our organisation.

Join us and help make a difference and a positive impact in making our Nation great once more. In addition, forming lasting friendships and support along the way.

NB.To avoid confusion, we are KnightsTemplar.org.uk, a well established, respected organisation & have no connection whatsoever to any political party ( as some so called Templar groups are) or to any other templar groups/sites/organisations.